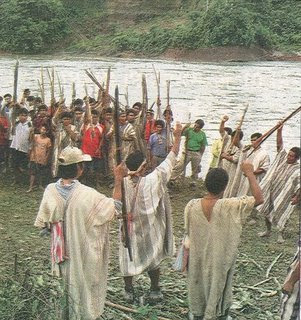 Violence in Peru: tales of the Government, Keiko Fujimori, Alberto Pizango, the quit of the Secretary Vildoso and the Decree 1090 off

There are several points about we must speak. Here an analysis of the most salient today about what happened in our Amazonian land:

1) The "official tales" have been cleared yesterday night in "Intimate Enemies" TV show in Frecuencia Latina (Channel 2). This means, despite being part of the apparatus of government and have sympathies with Fujimorism, distributed version of a couple of former Police whose brother was in charge of the safety of the Station 6 PETROPERU. The former official disclosed that the police had been kidnapped several weeks ago by hundreds of native Aguaruna (Awajun) and not 5 june.

This version was confirmed by a woman of this ethnic group. She was also invited to TV show "Enemigos Íntimos" with Beto Ortiz, the presenter. The government had said through the Minister of Interior (Secretary of intern affairs), Mercedes Cabanillas, that the soldiers guarding the Station 6 had been massacred and their throats slit on June 5, World Environment Day, and the atrocities that occurred in the town of Bagua, Amazonas, Indians handled by outside interests. Knowing in advance that President Garcia was unarmed contingent because the natives had taken away their arms, proceeded with the eviction operation disastrous road of Bagua. The recovery of the track could not be carried out under such conditions as over twenty agents were taken hostage. To break violently against the demonstrators, most of the tribe was Aguaruna was put at risk the lives of the policemen held. The outcome under these particularities, could not only be fatal to the troops captured.

To make the matter clear, imagine what would happen if the family members of a gang bank robbers , who maintains several civilians captive in an agency, they are harassed or suppressed by the police. Do not react bandits in some way against the hostages? Did not lose for a moment the wisdom to know that their loved ones being hurt? Well, that just happened to the natives who kept the police at Station 6 PETROPERU as surely aware that members of his tribe were being repressed. The eviction of protesters from various ethnic groups was interpreted as a declaration of war by the Government, which ultimately led to the hits with the police. Here it is remarkable that they were being treated cordially by the Aguaruna and his insanity was unleashed by the cowardly and reckless actions of the authorities. If someone put at risk the lives of police officers was arrested because the government knew that Amazon would take reprisals against them. The operation had ever done in these circumstances. Therefore the responsibility for what happened lies with the Cabinet chaired Yehuda Simon and the Minister of Interior. Officials said the natives were savages and could not talk with them, so spread a spot, we decided to apply force. However, based on dialogue, a small group of police got 3000 native reopen for a few hours the road that connects with Yurimaguas Tarapoto.

2) The Fujimorism, including Congresswoman Keiko Fujimori can not be more timely at this time to raise the temporary suspension of the Legislative Decree 1090. Not that the proposal to establish a balance between enforcement and the repeal of the controversial rule seems unreasonable, but that is not yours. This initiative, awarded erroneously concluded the Keiko, came from the former leftist parliamentarian Javier Diez Canseco, who proposed the legislation vacatio "from the decree in the daily La República, ie its momentary failure" while it discusses its unconstitutionality or repealing " in Congress. The position of Monsignor Diez Canseco joined Miguel Cabrejos, president of the Peruvian Episcopal Conference, and now a mediator between the state and Amazonian communities. This was also the religious to the Republic that "the government should suspend the implementation of decrees rejected by the natives." The call was picked up by Rolando Souza, Carlos Raffo, Fujimori lawmakers to say that Keiko is carving statesman. Both seek to create an image of the candidate conciliatory in order not to lose the votes of the electors of the jungle, a former stronghold of Fujimorism.

3) Granted asylum by Nicaragua Mr Pizango it was to be in that executive officials pressured the judiciary. Both Alan García as its Minister of Interior, Mercedes Cabanillas, called the arrest of "offender" Pizango before the judicial authorities issued an arrest warrant. In addition, the National Congress that helped the president to leave an injured AIDESEP press conference were accused by their peers APRA "to obstruct the administration of justice by facilitating the 'leak' of the leading native version that collapses to the fact that you attended where there was no warrant of arrest issued by the competent judge, "according to The First newspaper in Lima. Despite being granted protection Pizango for "humanitarian reasons", we should not ignore that the president of the country is aligned with Chavez asilante. The Daniel Ortega in Nicaragua is dependent on Venezuelan aid to supply subsidized fuel. This can not overlook because Nicaragua is within the orbit or sphere of influence of Venezuela. If asylum was proceeded by an indication of Chavez, who coordinated Ortega surely because Pizango could not take refuge in neighboring Bolivia, where he received numerous expressions of support, much less in Venezuela, because it would support the Government's outlandish thesis native protest that was directed from abroad. While Pizango takes refuge in the Nicaraguan embassy in Lima, tens of APRA were taken in buses to protest against the asylum that was granted by the Government of Nicaragua. The "companions" of the star were taken under the promise of getting a job (in the state) in exchange for stopping traffic and disrupt the order in a residential area. Technically took a public road and no police came to evict them. Surely the Executive rod when measured with different manifestations which disturb the peace are designed to harass their rivals.

4) The resignation of Minister of Women and Social Development, Carmen Vildoso, put pressure on the ministers who have decided to remain in their posts. Yehuda Simon should take a step to the side. Politically it is burned, is a stinking corpse that nobody respects or cree. If the Ombudsman and the Church will play its part in the Roundtable with representatives of native communities for what is he? Their lack of credibility forces him to consult, now, with experts (anthropologists, negotiators, etc.). On matters that are beyond their capabilities long. Good intentions are not enough and the opening in the absence of knowledge and experience, as in the case of Yehude Simon, who is a veterinarian by profession. Simon, who had reached fame as a congressman and former premier Jorge del Castillo has lost that quality in their dealings with the leaders of AIDESEP. Without the essential attribute that you installed in the Presidency of the Council of Ministers (PCM), their presence is foolish and capricious.

5) Had to die over 30, to agree in the Peruvian Congress finally to discuss the Legislative Decree 1090. The order for suspension of the rule, which have now been folded APRA and National Unity (Unidad Nacional), the main opponents to the repeal, shall be conducted during the national strike called by the Indians. This was carried out despite a state of emergency and curfew by the Government. Today is a day for decisive progress towards a settlement agreed between all political forces and representatives of communities or apus. Al aprismo and its allies had no choice but to give as the purpose of the decree can not be achieved under current conditions. No investment required to develop land for crops or exploiting exogenous find much resistance because of the indigenous peoples. As its purpose becomes impossible, the government has no choice but to sit down to discuss a new regime for land and natural resources of the Amazon. For the mediator (the Ombudsman and the Church) will not be easy to talk to the peoples of the Amazon after the unfortunate events of last Friday, killing 24 policemen and 9 civilians (5 of them natives, according to official figures). The anomaly that caused the Administration to not having consulted with the natives. This obligation arises from the Peruvian government of ratifying the ILO Convention 169 in 1993. Now back to the consultation will be made, which distorts the nature of the Convention.

The debate about rules affecting communities should be repealed because it is illegal to convene public hearings, involving representatives of native communities. Things have to be done properly without skipping steps or pre-established procedures. Otherwise new questions arise to what the House finally approved. One can only repeal the policy package. Its cancellation would not leave in limbo the forests of the Amazon, as many claim, because the rules would become effective earlier repealed. All orders affected by this defect should be removed from the legal system to begin to discuss substantive issues that sought to regulate.