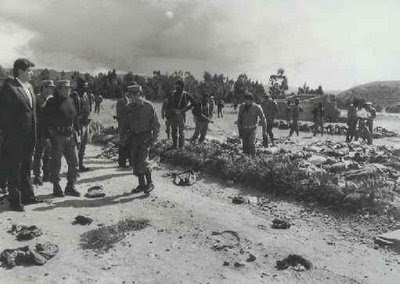 Alan García and the evil axis


In recent days, but especially on Sunday, the Peruvian president has shown his most dreaded and disturbing aspect. Garcia of the weekend to remind us intolerant leader who ruled in the eighties. Many thought that had changed and that more dialogue was appointed as independent experts in key positions of government and not let his party militants coparan the state apparatus. The new Garcia seemed to have understood that it could not govern alone, against common sense and national interests. Seemed to have learned its lesson in the golden exile in Paris, where he took refuge in silence and did not say much against the Fujimorism. But Garcia has now disappeared again and has been owned by the old Garcia, the youngest of the Garcia hallucinations that make you see ghosts everywhere as Hamlet.

His thought is reduced to Manicheism of them or us, or rather, me or them, is absolutely convinced that embodies progress, modernity and the way forward like so many other leaders poisoned by delusions of grandeur. Garcia can not rationally distinguish what is happening in the country. So it is left to carry impulses drugs and psychiatrists have tried to control for their sake and ours. Many believe that cree is obscured because it is "stealing" their "legacy", especially when their opponents objected to the decrees it signed with the best intentions of the world, according to him, but could be because you are angry you must return any money after concessions or sell part of the forest to private capital (over 60% of forested land have been handed to explore oil fields). The economist Humberto Campodonico says that the manifesto of the dog in the manger, published in 2001 in the newspaper El Comercio, represents the cutting edge to complete the unfinished neoliberal reform of the nineties whose ultimate goal was to privatize the natural resources of the Amazon.

Garcia has betrayed the doctrine of APRA and the center to embrace the idea that priority should be given to private initiatives. His dogmatic turn responded to the need to convince investors and agencies that it was an intentional head of state than the one that refused to repay the external debt (in fact offered an annual payment equivalent to 10% of the value of our exports the time), tried to establish an autonomous model (no trade or economic openness) and prohibited the free exchange to avoid macroeconomic imbalances (the possession of U.S. dollars). That Garcia was a carbon copy of Hugo Chávez, who directly or indirectly accused of sabotaging the "dynamism" of his administration. Both Hugo Chávez and Evo Morales represents, for him and some "thinkers" on the right, a component of the axis of evil designed to destroy the democratically constituted regimes in the region. The threat of Chavez is real, no doubt, and has ramifications and interference in the Nationalist Party led by presidential hopeful Ollanta Humala Tasso. These two axes (the two socialist countries and Humala) adds a third consisting of organizations that claim ancestral rights and the native communities represented by AIDESEP (Interethnic Association for the Development of the Peruvian Amazon) and some NGOs whose funding has not been clarified such as houses of ALBA. The three form the axis of evil that denounces the government in a spot that evil presents to the Indians as terrorists or instrumentalised handled by local politicians who in turn receive direct orders from Caracas and La Paz.

This conception of the executive is also shared by some banks as the National Unity, led by Lourdes Flores, and the Parliamentary Group of Fujimori Keiko Fujimori. APRA and its allies in Congress have postulated the theory of foreign intervention to warn the public of the danger and persuade Humala that development will be achieved only with the participation of private investment.

The best tradition of former U.S. President George W. Bush, Garcia draws a dividing line as the conquistador Francisco Pizarro on the Island del Gallo to delineate the side on which the progress. Those who support the "well" and advanced management patiently receive the "benefits" of a model that falls apart in the rest of the world [1].

The García government, in addition to wage the "ideological battle" [2] Chavez and the Nationalists, also claims to defend democracy from the troublemakers to commune with past ideologies (Marxism, Maoism, etc.).. This is paradoxical because, frankly, President Garcia is undemocratic to deny the right to query the Amazon peoples. This right, recognized by the Peruvian government and the ILO, not only allows communities to know beforehand the potential dangers of the presence of companies involved in extractive activities in their territories, so the consultation should take place before any project or grant - but the democratization of these groups and allowing the exchange of ideas in both directions, ie between the representatives of the State and the community and locals. The dialogue is natural source of democracy. Hence, collecting the concerns of those affected by the mining investment, oil, wood or gas helps gradually become true citizens. To the extent that they can explain their rights and exercise them assume responsibilities as any of us. Defending the right to consultation is to defend democracy. Anything that obstructs or impairs it is contrary to the democratic spirit that should govern under the rule of law.

However, the natives are not the force of impact or "fifth column" of a separatist movement since their claims are legitimate: they are asking for nothing more than the repeal of rules that contain contradictions or "catch-all" that can be used by some officials to change the status of their land. The conflict is generated basically because the people of the interior handle a different notion of property, which is not seen under an optical property, but as a vital institution that defines their identity. Problems if they remain artificial limits on their land because they are not sedentary beings as the inhabitants of the cities or the coast, but nomads that travel vast expanses in search of medicinal plants and foods. Step on the soil in the forest is their territory, ie, wherever they are moving up their environment. Why not work doing the degrees as COFOPRI agencies (which constantly receives requests for extension of communities not served). While the land problem is not resolved from an intercultural perspective, as well understood Mariategui, the viability of the country will be compromised.

Of the three axis of evil Garcia (which Bush Jr. were Iran, North Korea and Iraq before the illegal invasion), people are less suited to conform with many of its members fought in the conflict Cenepa against Ecuador. His courage and knowledge of the area prevented the successful offensive in the northern Ecuadorian territory. Despite not being rewarded by the state, have been instrumental in the fight against drug trafficking because they have to keep this social evil from their lands. Instead lotizar the forest to develop projects irreconcilable with their way of life and environment, we should be smarter to offer alternatives that respect the forest and its abundant biodiversity.
The case of indigenous Brazilians Tembé-ténêtéhar could be replicable because, according to the newspaper El País of Spain, "(...) will sign a contract for the sale of credits from carbon dioxide by one million reais a year (about 365,500 euros) . In return, the Indians are committed to preserving the flora of the reserve, which covers an area of 279,000 hectares in the Amazon jungle. " This not only guarantees them a secure income, but help preserve our forests. The conservation of flora and fauna is one of the most important points to which Peru is committed under the FTA with the United States must therefore ensure that the wood is placed do not have illegal origin. Legislative Decree 1090, resisted by the natives, instead of protecting the Amazon promotes illegal logging, according to a report of the Ombudsman [3], which would make it almost impossible to implement the trade agreement. [4]


------------------------------------------
[1] If our economy was so sophisticated and global, financially speaking, today we suffer as much as Mexico, Chile and Brazil from the ravages of the international economic crisis, according to researchers at UNAM, Oscar Ugarteche. As we are a backward country (without a capital market development), we escaped the turmoil that rocked Ireland, Iceland and the countries of Eastern Europe, former model economies the World Bank.

[2] That certainly lost, but have noticed that almost no one thinks all relax now and give the baton of growth capital.

[3] Article 41 of Legislative Decree 1090, at the discretion of the Ombudsman, would legalize the controversial origin of wood, which could encourage unlawful conduct. " This, rather than make improvements to the previous Law on Fauna and Flora, "which could generate primary forest was cleared to increase the number of hectares of forest land with fitness."

[4] Some civil wrong as the Minister for Foreign Trade, Mercedes Araoz, are in jeopardy if the FTA rules repealing unconstitutional hard to defend.